After a slow start to the year the weather mid-July and August has been very good, constantly in the mid to upper 20's with many days in the low 30's. The day for the annual hamlet mechoui was warm and fine so we all had a wonderful if rather long day.

As usual the two sheep were dispatched and prepared and set to cook over the barbecue in the early morning. Maureen had been busy for days preparing courgette gratin for the 80 plus expected to attend and cooks throughout the hamlet were also busy with all manner of menu items.

Although Maureen and I were there for breakfast the main day kicks off at 12.00 noon with aperos followed by starters, trou Normand, main course (lamb or chicken), cheese, deserts all for free if you live in the hamlet. After the midday meal which finished at 18.30hrs......yes that's 18.30 hrs the cards and boules competition began. The boules went on until 23.30 hrs and the 'evening' meal began. The day finished at 02.30 hrs - a strong constitution is required to survive the days events.The following day the few faithful workers arrived to clear up and stay for lunch to finish off the magnificent scraps!

This week we have Dutch guests in the cottage, two grandparents with two delightful grandchildren. The girls have enjoyed helping me feed the neighbours sheep, ducks and chickens as she is away on holiday plus they have enjoyed some fresh eggs for breakfast.

They had some local Dutch relations visiting and asked if Maureen could prepare and supply aperos when the relations arrived. Maureen prepared some tasty morsels:

There have been a number of houses in the hamlet bought and sold over the past few months, one belonging to Bob and Claire who have been here in France for 12 years after moving from the UK. They have moved to Spain for a life of all round sun especially in the winter. They have been good friends and we wish them the very best for a new life in Spain. 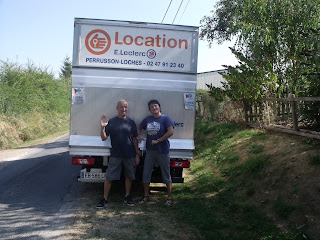