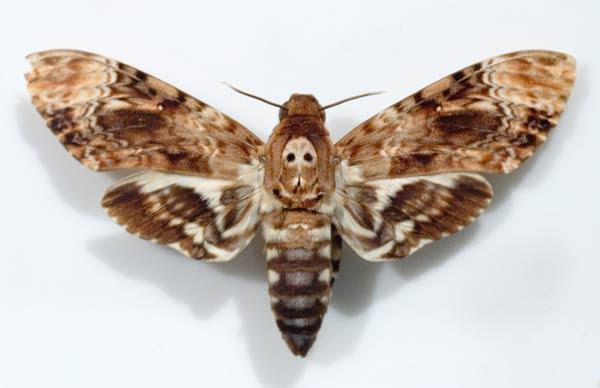 What's the story I hear you ask? Well, just before our Mechoui at the beginning of August, we had a small meeting to discuss the food, and our neighbour, Claude, brought with him a plastic box (with a lid - very important) containing some soil and the caterpillar (chenille) pictured above. We were amazed - the thing was longer and fatter than my middle finger. The colour was as you see above, an incredible thing really. What was more surprising was that no-one knew what it was, including Alain the farmer. We all wanted to know where Claude had found it - 'dans mes patates' was the answer. Eventually, another neighbour, Severine arrived and on seeing the caterpillar, promptly took a photo on her phone to send to a friend who was an etymologist.
On the day of the Mechoui we asked Claude if Severine had an answer but it appeared he still didn't know. We all waited for her to arrive (at 8 1/2 months pregnant, she was a little late, understandably!) and asked her for the result.
'Sphinx tete de mort' was the answer, and it didn't take me long to translate that one! Quite rare here apparently and her etymologist friend had asked if he could have it, to watch it pupate then hatch. Their wingspan measures about 15 centimeters so I for one am glad they are quite rare!﻿
Posted by Maureen ; John at 11:13 No comments:

Well, today dawned cloudy and damp, which after weeks of dry weather was a welcome sight for the grass which was just beginning to suffer in our field at the back of the house. It was probably an unwelcome sight for the organisers of the annual fair at Rosnay, a small village in the Brenne regional park.

The fair has taken place there since medieval times, and last year we discovered that 20,000 people had attended! This needed to be experienced for ourselves, so we duly took ourselves off this morning.

We were charged 2 euros to park the car (unheard of in France, but if the money goes to the commune then that's fair enough). The fair was like a big French market on steroids! There were all manner of stalls selling everything from mops and electric cigarettes(?) to CDs and shoes, together with the usual buvette stalls and andouillette with chips etc. Trouble was, it was raining a bit and the umbrellas made for a dangerous walk through the aisles of the market. We gave it a good shot, and were rewarded with sight of the horse-trading part of the market. There were some black Berrichon donkeys and all sizes of ponies and horses. We saw some magnificent Charolais bulls standing very quietly (at least I think they were Charolais). I would have taken some photos, but found the batteries in the camera to be flat. Typical!
However, you can get the general idea from some pictures I found trawling the internet:

It was certainly worth a visit - hmmm, I wonder whether John would let me buy a donkey for our field (probably not!)﻿
﻿
Posted by Maureen ; John at 14:16 No comments:

We've blogged before about the Compagnons du Musette group which features our 72 year old neighbour, Alain, as the front man.  You can check them out here www.lescompagnonsdumusette.fr

On Friday evening they were performing at the Auberge de La Gabriere In the Brenne park. Also on offer was a meal of Moules and frites. Not being able to pass up such an opportunity, 8 of us went along, although I have to own up to not liking moules, so Kay and I had entrecote and frites.


John counted roughly 500 places set out - this was to be a logistical feat on the part of the restaurant. As we had pre-booked, we found our places and settled down to a very convivial evening. We had already said hello to Alain, telling him we were the Inspectors from le Breuil, coming to check out the quality of Les Compagnons. He thought this was hilarious, and told all the other band members who rose to the challenge, giving us a splendid evening of their particular brand of musette. I have to confess to having bought one of their (many) cd's at the local market on Friday!
﻿

We joined in the dancing - Madison time again, but I resisted the urge to get up to some of the other line dances which seemed rather more complicated! They danced the bourree which seems to be a Berry folk dance with much stamping of the feet! We have tried this before, but with sympathetic partners who helped with the steps. Again, not to be tried on this occasion (we didn't want to show ourselves up!)

We left around 11.30 and the band was still going strong. I was amazed when I heard Alain moving his tractor at 9am on Saturday morning!
Posted by Maureen ; John at 20:00 No comments:

Its catch up time again

Its over two months since our last BLOG post, my oh my I am sure serious bloggers would rush for a cliff edge at such lax blogging!


My rather miserable excuse is that our BLOG reflects life here in central France, relaxed and slow, but as with all things its time to bring you news both for those planning to stay in the gite and friends alike. 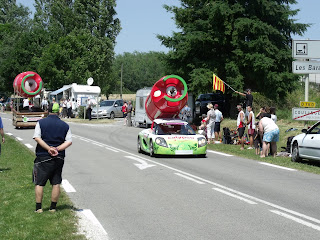 We were pleased to be able to watch the 'Tour de France' which passed close once again, as you know the GB team once again stood a good chance so we were out with friends to support the team 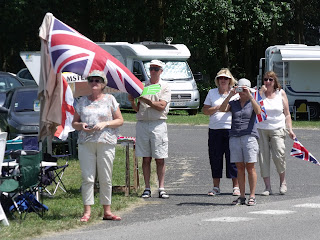 ﻿﻿﻿ Les Deux Platanes garden. Over the past few years the garden of the holiday cottage has been renovated and as with all gardens it takes a few years for plants to get established - our many guests in 2013 have enjoyed the plants and the structural improvements.
The village Mechoui

August is the time we organise the Mechoui ( The roast sheep barbecue). Its an annual event with the vast majority of locals attending. This year our cottage guests also attended and even more amazing they managed to survive the days eating and drinking. 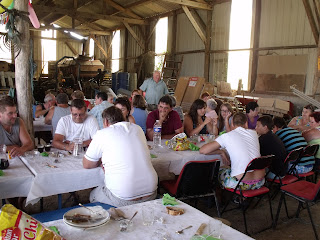