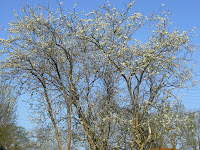 One of the nicest things about a spring birthday is the signs of life returning to the countryside, and nowhere is that more apparent than in France.
I took a walk around our garden and field yesterday and took some pictures of the trees in bloom - giving an idea of the fruits to come in the summer. 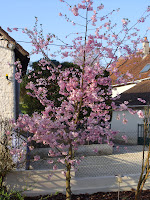 There are other plants showing off at this time of year, and the flowering cherry is perhaps the most dazzling.
Our friends exclaim every time they see it in full bloom - which it has been this week. We also have blossom on the forsythia and the blackthorn. The tulips are just opening and they offer a kaleidescope of colour. We love this time of year, when everything is new and clean. The buds are opening on the trees and the small new leaves are a bright shade of green. 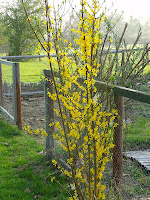 Perhaps one of the reasons we like this time of year particularly, is that it is my birthday. It was a big one this year and we are getting ready to host a fete champetre for our friends here in Le Breuil. The field at the back of the house is being spruced up and made ready for a marquee. We have been enjoying some lovely weather which I am not sure will last, but, whatever the weather I am sure we will have a good time with our friends, both British and French.

It's arrived at last, birds are singing, new shoots are appearing on the trees and the spring flowers are struggling up after a long winter sleep - springtime has arrived! The temperatures this week reached 24c in the gite garden although today its back down to 9c with rain in the air typical variations in the weather for March and April. We have commenced preparations for the new season and as always Les Deux Platanes will receive a refresh and spring clean that will reach into all the pipes, corners and hidden places. I have started with the exterior although Maureen tells me it was perfectly satisfactory before. Yes it was fine, but now it will be even better in my opinion. I am re-staining and treating the roofing timbers that are exposed under the eaves and repainting the masonry paint.

The garden for the house is also a priority as it's Maureens BIG birthday on the 29th March and we are having a party on the 7th April so preparations are in hand to ensure the place is looking tidy. I have even arranged for my good neighbour Dominic to help with some of the work, so things must be serious!

Look out for more springtime news. Our season starts on 14th April with guests from Australia, and we very much look forward to welcoming all our guests to Les Deux Platanes over the coming summer months.
Posted by Maureen ; John at 16:12 No comments:

Whist sorting through old photos I came across this photo from 2009, this was before the cottage opened as a gite / holiday cottage and we were still renovating the house. The cottage however looks as good in the snow as in the summer sun although it was very cold. Not unusual to be -12 during the winter months. Apparently it was -17 this winter and the snow stayed for over 2 weeks. Brrrr!
Posted by Maureen ; John at 10:43 No comments:

Maureen takes great pride in the garden of les Deux Platanes and our own garden although I appear to take on the responsibility of chief plant watering person during the year! This week we have been to the garden nursery and bought nearly 200 plants for the baskets, pots and flower borders, an increase from previous years so I can only presume the garden will be even more glorious than normal? 2012 is the year of the Queens Diamond Jubilee celebrations so parts of the garden will take on a red white and blue theme. We have also bought a number of new rose bushes which together with new planting undertaken in 2010 & 2011 should look very attractive.

Watering all the plants is not a job for the faint hearted and last year we were using about 110 litres of water per day just for the flowering plants and bushes which is a bit extravagant to say the least. This year we are going to resurrect our automatic drip feed irrigation system which, although it takes a lot of work to set up, uses far less water and delivers the water to the plant rather than the surrounding soil. 2012 also promises to be a dry year so using less water from our well will be important.

I have recently added a few new links to our gite website, the link to the Abbey of Fontevreau, (Henry II, Eleanor of Aquitaine and Richard are interred there) is particularly informative with lots of detail to help with holiday planning.

My good friend and neighbour Michel presented me with a very nice 1.5 litre bottle of 2008 Saint Nicolas-de-Bourgueil  and during a recent meal with friends in the UK we opened the bottle! It was an excellent wine to accompany a very well prepared Beef bourguignon, Maureen took a few tips from the Michelin chef Raymond Blanc and it was indeed a bourguignon sublime!