You can be sure of one thing when you choose to visit any historic buildings in mid November ......... you will encounter few tourists. Today we travelled to Chinon to visit the recently renovated chateau and castle. Other than four visitors from the USA we had the entire castle to ourselves. The entire castle has recently undergone a massive 14.5 million euro renovation and this plus all the latest visual and interactive displays provides the visitor with a wonderful overview of its history. 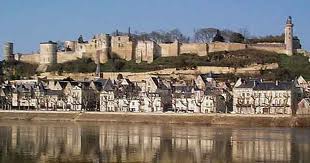 Château de Chinon is a castle located on the bank of the Vienne river in Chinon, France. It was founded by Theobald I, Count of Blois. In the 11th century the castle became the property of the counts of Anjou. In 1156 Henry II of England, a member of the House of Anjou, took the castle from his brother Geoffrey after he had rebelled for a second time. Henry favoured the Château de Chinon as a residence: most of the standing structure can be attributed to his reign and he died there in 1189.
Early in the 13th century, King Philip II of France harassed the English lands in France and in 1205 he captured Chinon after a siege that lasted several months, after which the castle remained under French control. When King Philip IV accused the Knights Templar of heresy during the first decade of the 14th century, several leading members of the order were imprisoned there.
Used by Charles VII in the 15th century, the Château de Chinon became a prison in the second half of the 16th century.

Chinon is one of the many places you can visit from Les Deux Platanes.
Posted by Maureen ; John at 19:17 No comments:


I was not aware such a thing existed but it appears to have struck with vengeance in the later months of this summer. Our last guests have just left Les Deux Platanes, three Australians. It’s a strange thing that we commenced the year with four Australians and ended the year with three Australians both groups had mixed weather as you may well expect in March and November! However both groups also enjoyed the log fire which apparently is an unusual feature of any Australian house.  The cottage is now being closed and ‘put to bed’ for the winter and we very much look forward to preparing it for our guests in 2013.


Yesterday we participated in the 11th November remembrance ceremony and parade and associated service in Chatillon, our local small town. There was a very good turnout of locals and along with Christopher Coombes who was invited to lay the French wreath with the mayor I was invited to lay a Poppy wreath some good friends had brought from the UK. After the remembrance service and associated events the local ‘ancient combatant’s’ had arranged lunch – 9 courses including wine! The French can certainly put on an impressive meal in the local village hall. Seventy of the ancient combatant’s attended along with four English, we were very well looked after, I have to say and it was an honour and privilege to be invited.
﻿ On Saturday 10th November we were invited to the Auberge de la Tour (a local restaurant) to celebrate the birthday of Nick another English friend who together with Janet lives a few miles from here. On arrival at the Auberge I was concerned as it was very busy indeed. Every table was booked plus an adjacent room – 3 big birthday groups plus normal customers. Could they cope with such high numbers?  As it turned out everything was just fine, great food, great service and a great evening.  The Auberge certainly seem to have improved significantly over the past few years – great news for gite guests as it’s the nearest local good restaurant.


After nearly seven years the renovations to the main house are nearly complete - great I say to myself!. I have just managed to finish the roof terrace before the bad winter weather arrives, internal decoration can wait until next spring. Its been a long hard but enjoyable slog I have to say and I am very pleased that the vast majority of the heavy work is done as I seem to suffer from more aches and pains as the years pass. Its not the sort of renovation task I will choose to start again now that I am over 60!